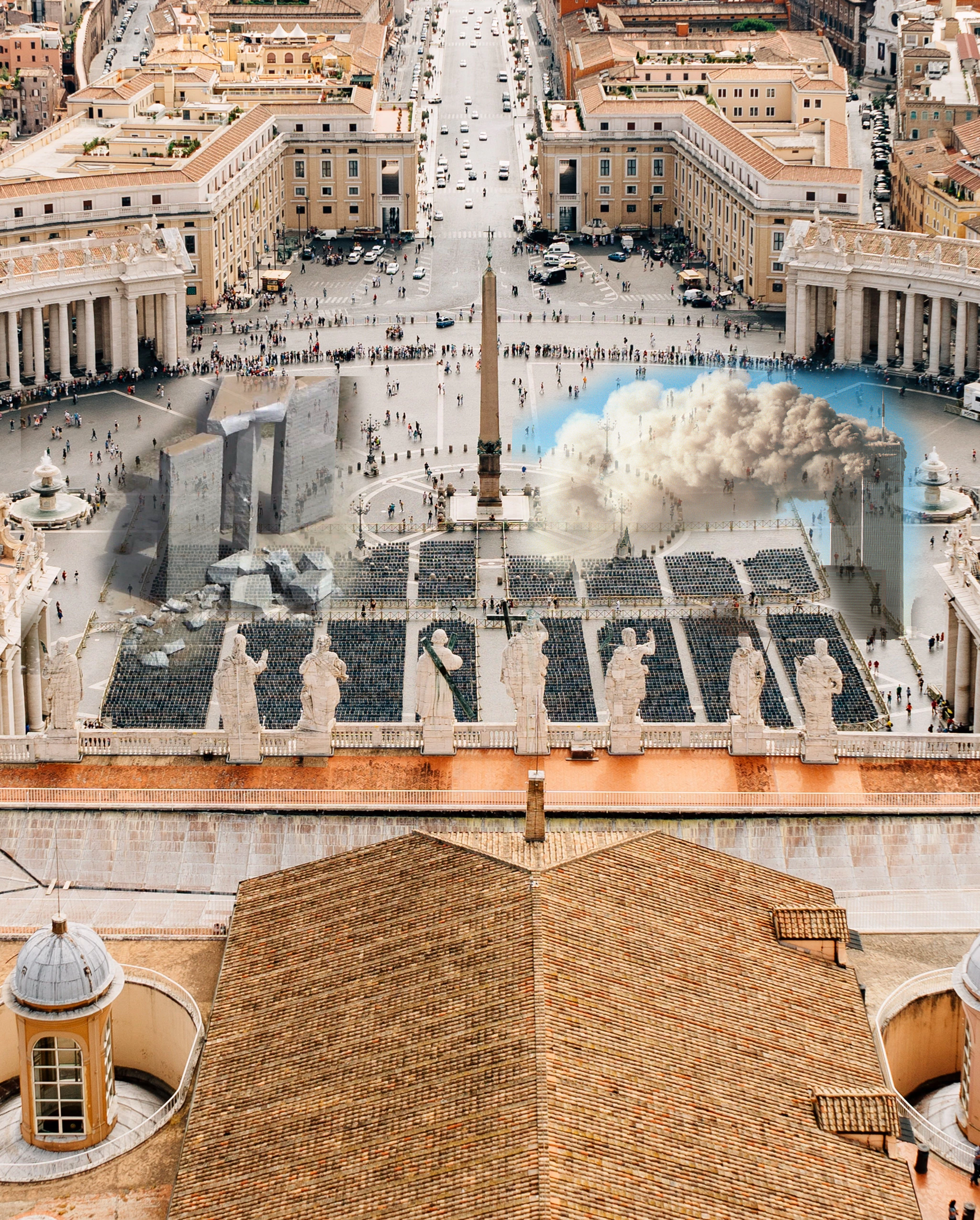 July 6th, 2022, a day that will not live on in infamy; a day that will likely not live on at all; a day that will most likely be forgotten, yet should not, for upon that day, the first day of the pagan Roman holiday of Ludi Apollinares (the Apollo games), the Georgia Guidestones were destroyed in the symbolic act of controlled demolition of the old era.  With this destruction, the time capsule at the site was to be opened and its contents revealed once and for all.  Yet what was revealed to the public, although later deemed a hoax, was rather anticlimactic, to say the least.

What was initially explained to have been found in the capsule and later dismissed by "fact checkers", according to Sheriff Melvin Andrews, was: "A single eight-track tape of 'Saturday Night Fever', a Peterbilt emblem, an October 1979 Playboy magazine signed by Burt Reynolds, and a bag containing 1,734 Quaalude pills".  Was this reporting of the capsule's contents purely a hoax perpetrated by anonymous online pranksters or was it picked up by international media and spread because of something intentional to agenda?  Were these contents just a red herring, distracting conspiracy sleuths or might there be something to glean from the symbolism?  Let us assume the latter for the sake of curiosity.

Why a Playboy magazine? Well, Playboy is another big club that you and I ain't in, as George Carlin would note. Burt Reynolds is the star of this particular issue. Seems like it has no rhyme nor reason--just a secret class mocking conspiracy researchers and decoders. Yet, I'll take the bait. What's in a name, for example?

Burt, comes to us from the Old English "beorht", which means "bright". Reynolds may be derived from the Old Norse "Rognvald" meaning "regal valor". Bright regal valor. This, astrologically, may possibly imply the bravery of a star king. Bravery over what?

Also listed on the cover of the magazine is an article of the great Alabama coach, Bear Bryant. Bear Bryant's birthday was September 11th, oddly enough. Yet what may link Burt Reynolds to Bear Bryant in this symbolism? Well, in Reynold's popular photo in the magazine, he is lying naked upon a bear-skin rug, which suggests a conquering.

Also previewed on the cover, you'll read the name Gary Gilmore. Gilmore admitted to two murders and was executed by firing squad.  Could the inclusion on the cover of the two murders be foreshadowing of the Twin Towers and Gilmore's execution the bombing of WTC-7. Maybe, maybe not, but food for thought.

Why the bear symbolism? When we look to the stars, as far as bear mythology is concerned, we see the tale of Callisto and Arcas. We see Ursa Major and Ursa Minor, both in the northern sky, Ursa Minor containing Polaris, the North Star. Which Tower was struck first? That's correct--the North Tower.

If this 1979 magazine is depicting a future event, is it possible that the 'Saturday Night Fever' 8-track tape is depicting Covid-19--the fever of night, of darkness, of the Saturnian rule? Perhaps a stretch, but food for thought. The Quaaludes add to this idea when we consider the pharmaceutical overlords. The word "Quaalude" translates to "quiet interlude" when recognized as a portmanteau. Perhaps this is suggestive of the lull before the storm.

There were 1,734 pills. This made me curious if anything of secret society significance occurred in the year 1734. The only thing that stood out to me was the creation of the first Freemasonic lodge in the Netherlands. This was done by a man named, Vincent Chapelle, a master cook to many of the highest names of royalty in that time. Perhaps there is nothing of significance or perhaps Vincent Chapelle is cooking up yet more food for thought.

An interesting side note: both September 11, 2001 and the destruction of the Georgia Guidestones occurred on a Wednesday. This is the day of Woden--the Norse god who predicted Ragnarok. Ragnarok is to be a time of great battles, natural disasters, death, and ultimately the destruction of the entire cosmos and everything in it.

The last item is a Peterbilt emblem. This one stands out in particular to me, as it does not go with the disco party theme of the other contents. This may lead one to see this as the major clue that tells us where the true contents of the time capsule were relocated. So I studied upon the word Peterbilt. Is there a structure that Peter built? Or perhaps a structure built upon Peter?

"And I say also unto thee, that thou art Peter, and upon this rock I will build my church; and the gates of hell shall not prevail against it."

Rumor has it that Vatican City was built upon St. Peter's remains. Peter is from the word "petra" which simply means stone. How appropriate for a capsule containing secrets of the global cabal leading from the stones of the New World back to the pagan empire that collected all of the old and designed all of the new control systems? The stone of the material plane, encapsulating spirit, structuring the masonry of the sacred geometry which binds us to the ethereal. Peter built--built of stone; just as an ancient pyramid or monolith; just as an obelisk--the penis of Osiris that connects so many key points on the globalist grid all the way from Egypt to Washington DC to Rome.

Hugh Hefner was, not only a playboy as he's primarily portrayed, but a secret sex trafficker, most likely working in network with the likes of the Vatican. As loose, strange, and far-reaching the strings may seem that I am drawing, however scattered and winding, I offer these merely as an appetizer of Imagination. I want you to perceive all things more deeply and become ever observant of patterns. We need to out-think their think tanks and dark Occult magick encoding systems. And who is the Vatican's think tank?

The Club of Rome is one big club and we ain't in it.

When you peruse the Club of Rome's website, you'll come upon the 'Fifth Element Program'. What is this program, you ask? Well, it is not defined by the Club of Rome nor will you find it anywhere in your search. All browsers are cluttered with the movie or fifth element brand names and companies, much of which, it should be noted, are Fourth Industrial Revolution business models and technologies. The 5th Element Group, for example, seek to facilitate workforce realignment. My curiosity was beyond piqued, stumbling upon this program, yet I can find no information. What on God's green earth is the Fifth Element Program?

It should be noted that, esoterically, the fifth element is aether and that is where this program remains. That is where the capsule exists. That is where all answers to the true ruling class resides. It is all such an ethereal speculation, yet one we must be brave enough to indulge. For we may never glimpse their knowledge if we never face our ignorance with courage and valor to fail in wanderings of mind.

Those of the big club throw water balloons down upon us from their clubhouse window. They laugh maniacally because we can do nothing about it from below. We are helpless in our soaked humiliation ... or are we?... Perhaps if we consume enough food for thought, we may grow wise enough to no longer snack at their trough of shit and begin to chop at the tree base holding their big club and every villainous fiend within. Our wisdom is their fall! Their fall is our rise from the ruins!