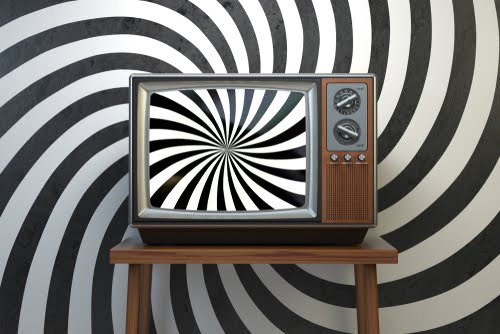 In 2022, the average adult will spend an estimated 3 hours watching television each day.  In the late 1990's, viewers were watching for 4 hours each day.  That is two months a year spent in front of mind-channeling programs.  However, these same people spend not one single solitary moment considering the box captivating their attention.  We do not take a minute out of our lives to ponder what this hypno-contraption really is or why/how it exists.

The first known motion picture with live-recorded sound was in 1894/95, titled the 'Dickson Experimental Sound Film'.  Yet silent movies persisted into the late 1920's.  Talkies didn't really take off until the 1930's.  One may ask why?  If the technology existed to record both audio and video, why did it take so long to hit the mainstream audience?

Perhaps there was agenda.  Perhaps there was a psychological operation at play.  What if the U.S. government wanted to give an experience of deafness in a virtual world of muted portrayal?  Imagine the mental state that is molded by this: no speech, no soundtrack, no sound effects; only a tale of silence--a muffled existence.

Perhaps jazz, in all its rhythmic chaos of auditory orgasm, arose in rebellion of the lull and quietude.  And so the 20's roared a loud contrast.

Lumiere Autochrome was introduced in 1907 as the first commercially successful color photography process.  Kodak introduced Kodachrome film in 1935.  So filming in color should not have been an issue from 1907 onward, although color photography existed well before--1861, in fact, when James Clerk Maxwell developed the three-color process.

The first color television patent was issued in Germany in 1904.  In 1925 in Russia, another patent was issued for a color television, although neither of these early patents left the page for actual design.  Then in 1940, a practical, buildable, and marketable color television was created by Guillermo Gonzalez Camarena, a Mexican engineer.  Yet it wasn't until 1972 that the number of color television sets sold surpassed black-and-white sales.  In fact, hotels and motels around America boasted "Color Television" clear into the 1980's, as if a strong selling point of novelty and modern marvel.

One may simply chalk this up as a natural progression due to the high cost of color TV's.  But when we analyze the fact that the functional mechanics and design of color TV was being tackled from 1904 onwards, one may be led to ask why would it take another 32 years after its invention in 1940 to be mass produced at an affordable scale?  Again, was there agenda?  Was there a psychological operation at play?

What if our government wanted a population--raised by the parents of silence--to be conditioned to a virtual world of black, white, but mostly gray?  What does this do to a psyche--to reside in captivation of a colorless realm?  Every day, this generation escaped to a place and plot of achromatic neutrality.  What is a mind without hue?

Perhaps psychedelics, in all its flamboyance of tie-dye and kaleidoscopic artforms, arose in rebellion of the black and white drabness.  And so the 60's bloomed brilliantly a power of flowering contrast.

Right alongside photography, moving pictures, and television, the computer has been evolving.  In 1822, the Babbage Difference engine was designed--the first mechanical calculating machine capable of tabulating polynomial functions.  Herman Hollerith, in 1890, designed a machine for quickly tabulating the U.S. census by storing information on punch cards.  Konrad Zuse created the Z1 in 1936, which was the first electro-mechanical binary programmable computer.  The Z3, the first fully automated functioning programmable computer was introduced to the public in 1941.  The first fully functional digital computer was the ENIAC, completed in 1946, taking up 1,800 square feet and weighing nearly 50 tons.

Designs rolled out, problems were solved, funding was pumped into every scientific laboratory and classified military base and the computer very gradually evolves, juxtaposed to the very slow progression of the TV.  We're conditioned to see the previous century as a technological explosion, yet it was the flow of molasses.  One would not expect the modern computer to simply flash into existence over night, however; why is the invention of the first personal computer so mired in obscure history as well as the invention of the internet?  Why was the government so heavily involved in the computer's creation, usage, and progress to market at every step?  Why would it contain a net and a web if not for catching prey?  Why is its screen called a "monitor" if not to monitor our every thought, behavior, interaction, transaction, and algorithm?  Agenda?  Psy-op?

Perhaps, in response to the new programs of augmented reality, we arise in rebellion and turn off the hypnosis.  Perhaps we turn off their agenda and unplug their psychological operation as it progresses into a metaverse.  Perhaps we turn the channel upon them and glue their eyes to their own trap.  No more boobs of the tube, I proclaim!